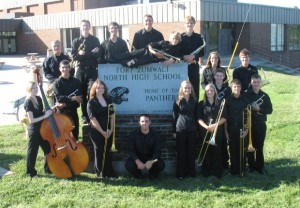 The Jazz Band performed at the 64th Annual Midwest Clinic in Chicago; the second time an FZN Jazz Band has been awarded this honor.

The FZN Jazz Band has presented concerts at the Midwest Clinic in 2004, 2010 and 2015, The 2010 Jazz Education Network Conference, and three times at the Missouri Music Educators State Conference. Recently the FZN Jazz Band has taken a noncompetitive approach to its curriculum. This approach centers on mastering a large variety of jazz styles in preparation for performing with some of the great jazz artists in our country and for pursuing jazz performance after high school.

By the end of the school year, every member of the band will perform an improvised solo in concert and the band will have read between 40 and 50 jazz charts. This approach also allows band members to appreciate the performances of other young groups while striving to achieve at the highest level for themselves.

The Jazz Band meets every day as a 55-minute class, as part of the district’s performing arts curriculum. Students must audition in the spring for placement in the band.